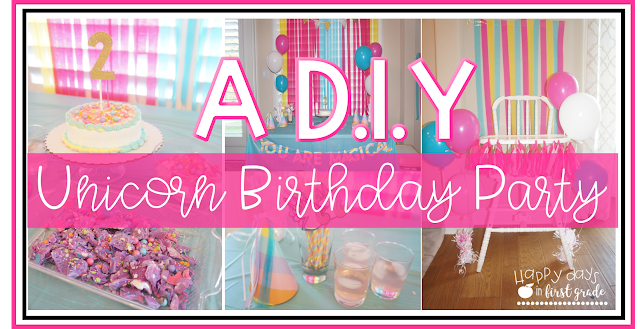 Well, since I am a Do-It-Yourself kind of gal, I was up to the task to do just that but also on a budget!

First, to decorate her high-chair, I simply cut pink streamers to size, folded them in half, cut slits to the make the tassels, and then twisted the halves on a long string of white yarn. Once all the tassels were made, I taped the entire string onto the tray.  I then added some pink, white, and aqua blue balloons and streamers onto the wall to give a little POP of color! 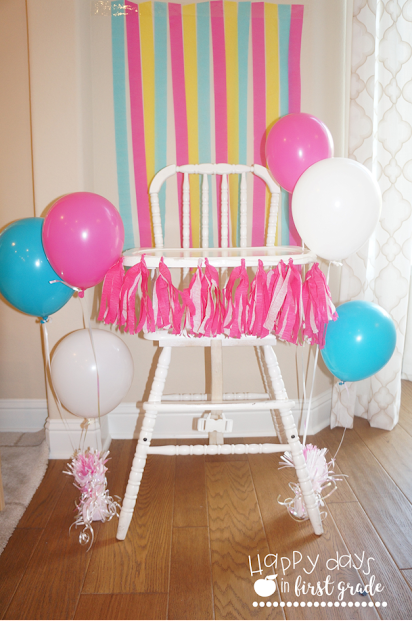 For her cake table, I decorated the background with matching yellow, pink, and aqua streamers in alternating heights.  The easiest way to hang streamers that I have found, is to tape them beforehand on a long piece of clear tape.  Once it’s complete, hang the entire strand to its designated spot.  It’s SUPER easy to put up and SUPER easy to take down! I also added a white and gold glitter banner to the background as an accent.  I also added to the cake table some unicorn paper straws, party hats, unicorn chocolate bark, cupcakes, small marshmallows drizzled in unicorn chocolate, balloons, and a simple cake.  The banner in the front of the table fit perfectly with our theme and made her day even more special! 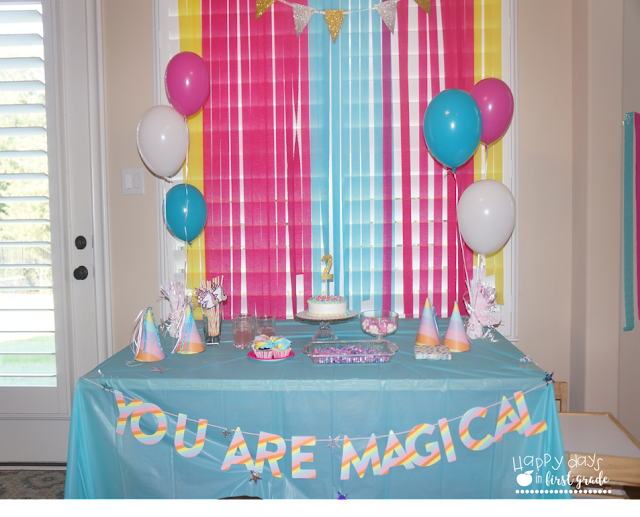 To make the Unicorn Bark, I melted pink, blue, white, and purple chocolate together in a microwave on a tray low heat. I then mixed the colors together then sprinkled sprinkles on top, left it out to cool and harden, broke the large piece into chunks, and then TAH-DAH! 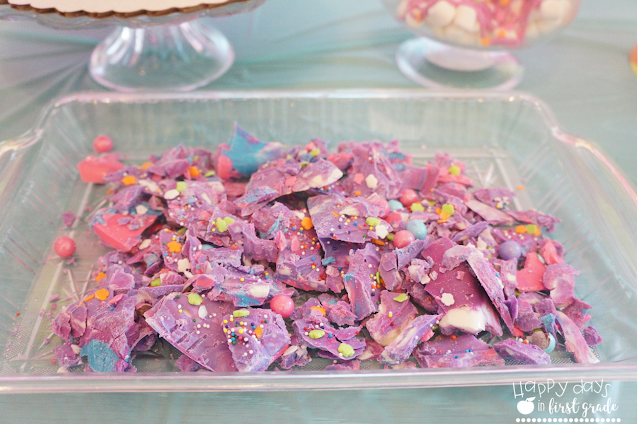 To make the unicorn marshmallows, I saved a small batch of unicorn chocolate and poured into a small Ziplock bag. I then cut a small hole in the corner with the bag tightly closed, then I carefully squeezed the chocolate over the small marshmallows and added sprinkles on the top. 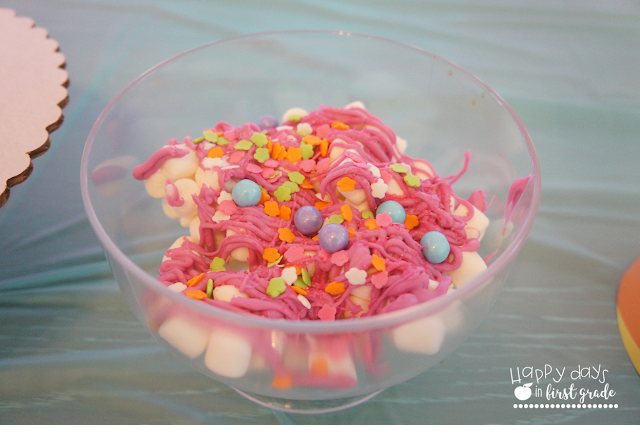 These adorable party hats and paper straws from Target with some pink lemonade were easy and super fun touches!  And of course, rainbow cupcakes and cake to top it all off! 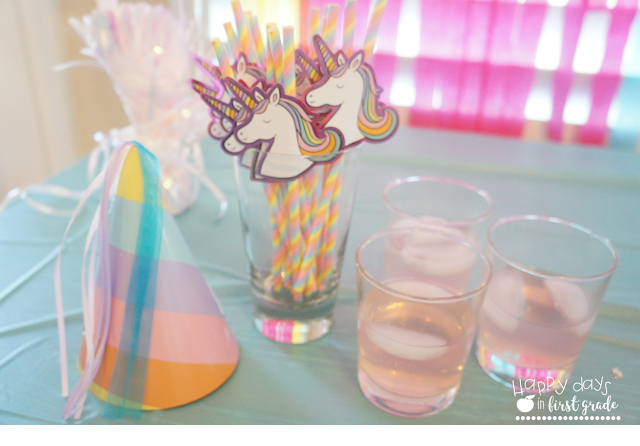 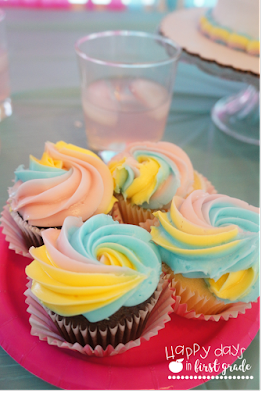 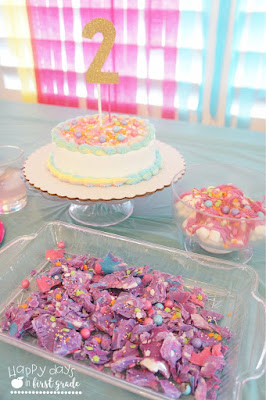 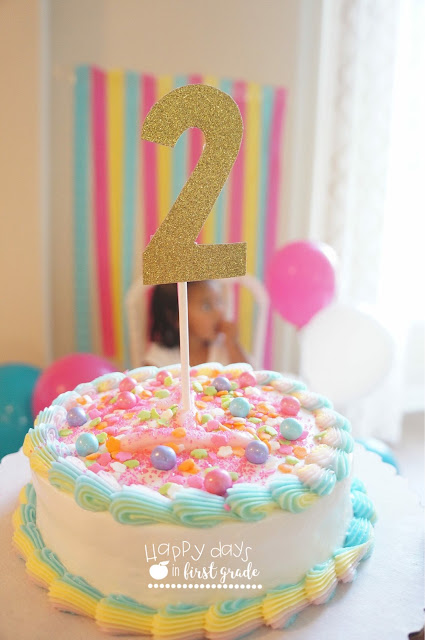 Well, our little unicorn had a blast and loved all her decorations! I think daddy was a little tired in the end (notice him lying in the background), but it was ALL worth it!!! 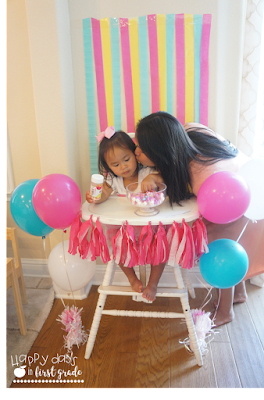 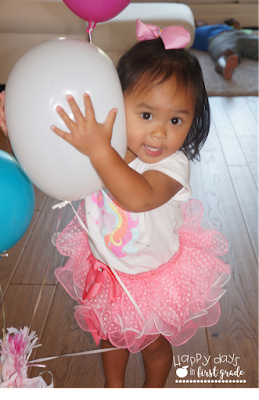 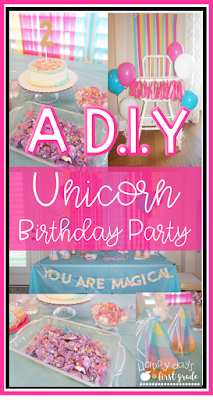 My name is Ha. I am a Primary STEM teacher from Texas, a passionate educator of little ones, a teacher-author of interactive educational resources, a lover of Makerspace and STEM, a mother to two, a wife to my high school sweetheart and a forever learner. Welcome to my site!

Do you do time capsules with your students?! It’

What’s one of your favorite EOY books? I loved t

🚨FREEBIE ALERT!!!🚨 Have you grabbed this En

Need some fun options for your End-of-the-Year gif

Do you need fun and meaningful activities to do fo